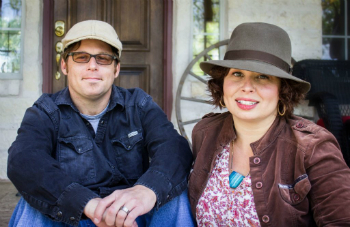 Adam Carroll: A Texas Songwriter born and raised, Adam Carroll takes the events of ordinary lives and turns them into deeply moving, often humorous songs. With seven Indie CDs supporting regular tours across the USA, Canada and Europe as “one of the hippest songwriters on the Texas music landscape”, this engaging Americana guitar-picker has earned further critical acclaim with song placements in the Grammy nominated film, “Country Strong” and others. Adam released “I Walked In Them Shoes” to critical acclaim in 2019.

Chris Carroll: Chris Carroll is originally from St. Catharines, Ontario. She now lives in San Marcos, Texas with her husband and music partner Adam Carroll. Carroll’s music does a little bit of genre hopping, pulling in influences from all over the map, but her music is still deep within the Americana roots and has the ability to draw in an audience. Chris released her debut record, “Trouble & Time” in 2014, produced by David Beck (Sons of Fathers & Blue Healer). Chris and Adam released “Good Farmer,” a duo record, in 2019.