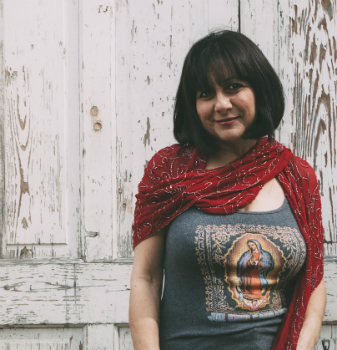 “I’m gonna find me a new song to sing,” declares Tish Hinojosa on the title track of her new album, West. One of 13 children born to Mexican immigrant parents in San Antonio, Hinojosa has dedicated her career to playing music from the southwest, starting out in Tejano before moving on to singer/songwriter folk, border music and country. Hinojosa’s new originals are at the heart of the collection, from the romantic tribute to the missions in her hometown (“Church of the Mission Bell”) to channeling Patsy Cline in a bittersweet country shuffle (“Can’t Say It Matters Anymore”) and even a co-write with son Adam Hinojosa-Barker (“I Can Be the Wind”).

West is a welcome addition to a resume which features releases on A&M, Warner Bros., Rounder, Watermelon and Lone Star, a command performance for President Bill Clinton and Hillary at the White House with Robert Redford, and numerous prestigious honors, including the NAIRD Indie Folk Album of the Year for 1992’s Culture Swing. Tish Hinojosa’s trip continues its long and winding road.